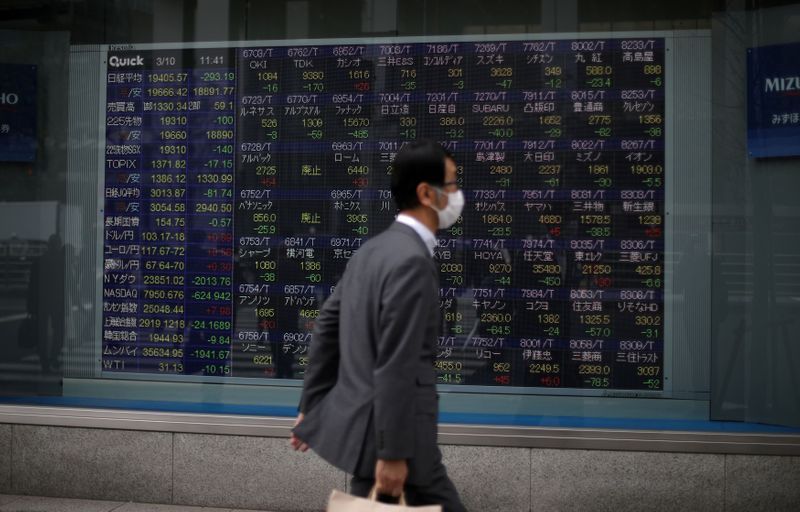 Bonds sold off and stocks took a breather on Wednesday as investors waited to hear from the Federal Reserve about its next moves to support the U.S. economic recovery, while oil jumped to a five-month peak as a hurricane disrupted output in the Gulf of Mexico.

MSCI's broadest index of Asia-Pacific shares outside Japan edged down 0.1%, retreating slightly from a two-year high hit on Tuesday. Japan's Nikkei was off 0.1%.

Futures pointed to a similarly steady start in Europe, with Euro STOXX 50 futures up 0.1% and FTSE futures up 0.2%. S&P 500 futures were flat.

The U.S. dollar steadied in currency trading, while the yield on U.S. 10-year debt rose to 0.7150%, close to testing a two-month top, as the bond market begins to price in an eventual return to inflation and growth.

Fed Chairman Jerome Powell is due to speak at a virtual Jackson Hole symposium on Thursday and investors think he could outline a more accommodative approach to inflation which would open the door to easier policy for a long time to come.

"There's positioning ahead of that, we're starting to see a decent steepening of the curve," said Chris Weston, head of research at brokerage Pepperstone.

"The market knows the world is healing," he said. "I think it's pretty clear that the world is improving better than what most people had positioned themselves for in fixed income...maybe for once the equity market was right."

In commodity markets oil prices hung on to overnight gains as U.S. producers closed offshore output and battened down as Hurricane Laura drives toward the Gulf Coast.

Producers evacuated 310 offshore facilities and shut 1.56 million barrels per day of crude output, 84% of Gulf of Mexico's offshore production - near the 90% outage that Hurricane Katrina brought 15 years ago.

Brent crude futures sat by a five-month high touched on Tuesday at $46.02 a barrel, up 16 cents. U.S. crude futures were steady at $43.35 a barrel, though analysts believe the lift is temporary.

"While global oil demand is expected to trend higher from here, total oil consumption isn't expected to return to pre-COVID levels until 2022."

An apparent easing in Sino-U.S. tensions, with a productive call this week on trade, has improved sentiment, though economic data has been mixed.

Consumer confidence dropped to a more than six-year low in the United States this month, data showed on Tuesday, but that came with a boom in home sales.

In currency markets, stronger-than-expected business sentiment in a German survey helped the euro.

The common currency dipped to $1.1810 on Wednesday as investors fretted about the possibility that Powell does not sound as dovish as investors expect - particularly on the issue of inflation targeting.

"Dovish expectations seem to be quite loaded for this event, and the dollar may bounce if Powell disappoints the doves," said OCBC Bank currency strategist Terence Wu.