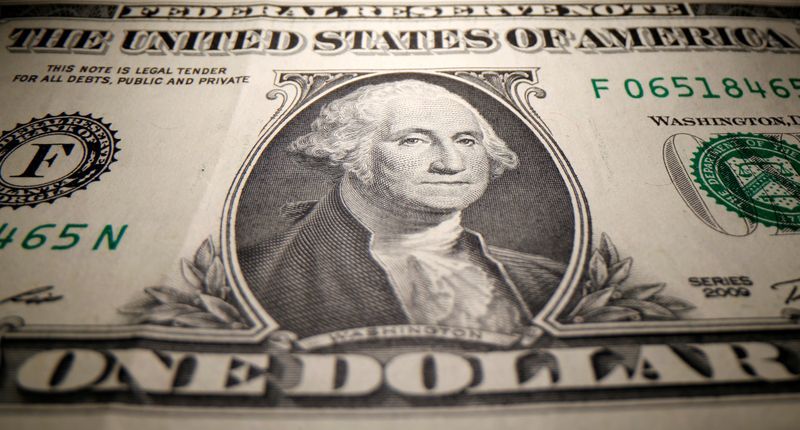 The dollar bounced off a two-year low on Tuesday as selling pressure faded ahead of a Federal Reserve meeting and as political wrangling over the next U.S. fiscal rescue package moved closer to a conclusion.

The world's reserve currency has been tumbling since May and was dumped in recent days as cracks in the U.S. coronavirus recovery and crumbling yields sent investors elsewhere.

Buyers crept out of the woodwork following a pullback in the gold price halfway through the Asian session, lending the greenback support and pushing other majors off milestone peaks.

Most analysts say the reasons for the dollar's broad decline, especially falling real yields, remain intact but that the pace of the drop probably warranted a pause - particularly with a Fed meeting and a U.S. spending package in the offing.

"Perhaps it is a case of the market running ahead of itself," said Moh Siong Sim, currency analyst at the Bank of Singapore.

On the horizon is a Fed meeting that begins later on Tuesday and Friday's deadline for U.S. Congress to extend unemployment benefits - both unpredictable enough to inject some nerves into bets against the dollar.

Against a basket of currencies (=USD) (DXY) the dollar lifted from a two-year low of 93.492 to hit 93.918. Still, it is down 3.6% in July and will need a stronger bounce to avoid posting its worst month in almost a decade.

No policy change is anticipated at the Fed meeting on Wednesday, but investors expect to hear its super-easy outlook reaffirmed and are speculating about a change in emphasis in the forward guidance.

One shift could be to average inflation targeting, which would see the Fed aim to push inflation above its 2% target to make up for years of under-shooting.

That prospect has pressed on U.S. real yields, sending the yield on inflation-protected 10-year paper to a record-low -0.92% last week, where it has held.

But a lift in nominal yields, pushing the 10-year (US10YT=RR) to a week-high 0.63% on Monday, suggests investors could "sell the fact," even if the Fed sounds dovish.

"The (Fed) announcement may be a damp squib, or even lead to some modest fixed income selling to take profit," said Steve Englander, head of global G10 FX research at Standard Chartered (OTC:SCBFF) in New York.

A big U.S. fiscal package - currently deadlocked in negotiations between Democrats, who have made a $3 trillion proposal, and Republicans who have tabled a more modest $1 trillion plan - could also boost the dollar if it passes.

The current Republican plan would reduce an expanded unemployment benefit from $600 per week to $200 at a time when some 30 million Americans are out of work.

U.S consumer confidence and manufacturing data due at 1400 GMT will also give markets the latest read on progress in the U.S. economic recovery.

On the virus front, U.S. infection rates may be stabilising, with a 2% drop in the number of new cases last week - but the economic impact of curbs to restrict its spread and of job losses are only beginning to be felt.