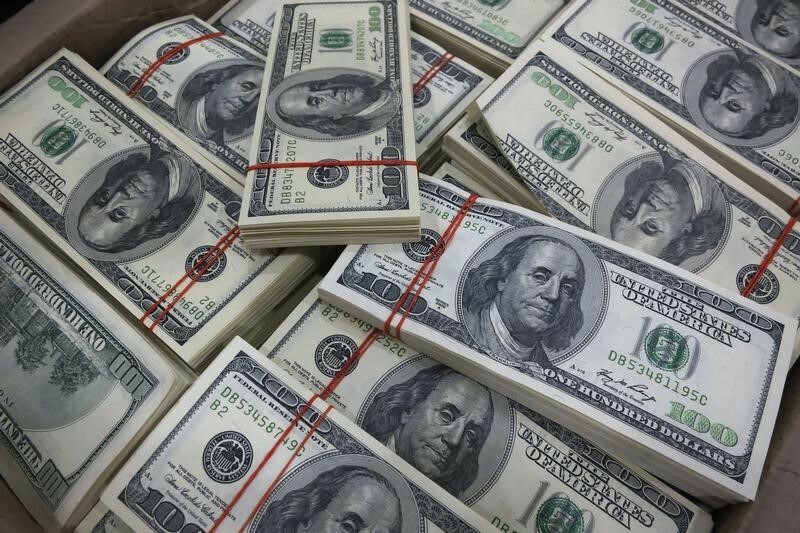 This comes with the U.S. economy already showing signs of a strong recovery as its aggressive vaccination program results in large parts of the country reopening.

The ADP report on Wednesday showed U.S. private payrolls increased by 517,000 jobs last month, a precursor to Friday’s official employment report which is expected to show another increase of around 650,000 payrolls in March.
A survey by the Institute for Supply Management on Thursday is expected to show a further improvement in the manufacturing activity.
This increased optimism in the U.S. dollar is best reflected against the euro, with EUR/USD down 0.1% at 1.1723, not far off the near five-month low of 1.170 after ECB President Christine Lagarde's dovish interview on Wednesday.
Large parts of Europe are struggling with a third wave of the Covid-19 virus, shutting down much of the region, resulting in Germany’s retail sales dropping 9.0% on the year in February.

“The environment is clearly supportive for USD, particularly when Europe continues to battle with the third Covid wave,” said analysts at ING, in a note.

But “USD upside in Q2 should be more limited and European FX should eventually see some reversal,” ING added, as Europe’s vaccination process gathers pace while the American infrastructure spending is accompanied by around $1.8 trillion worth of tax hikes.

Elsewhere, USD/CNY rose 0.3% to 6.5715, after China released a disappointing Caixin Manufacturing PMI earlier in the day, reading 50.6 for March, the lowest level since April 2020, and a drop from February's 50.9.

These findings contrast with those in an official survey, released Wednesday, which showed manufacturing activity grew at a stronger pace.