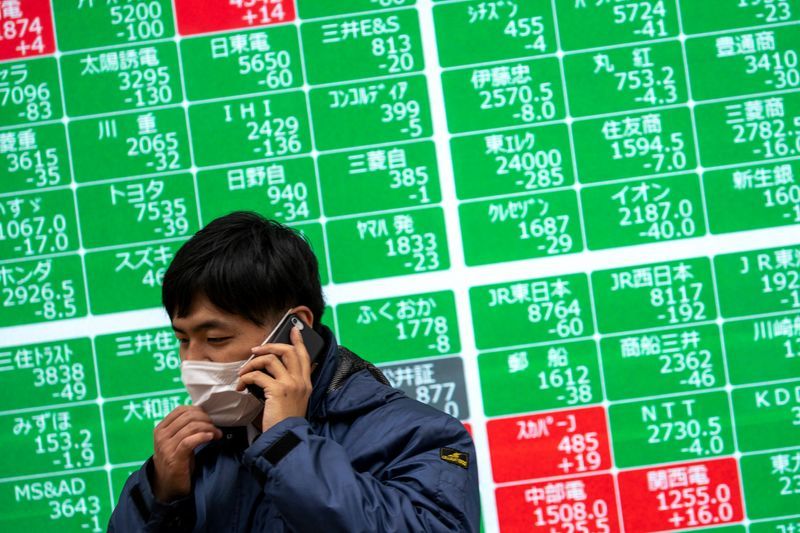 Asian stocks hovered near four-month highs on Thursday on hopes of a vaccine for COVID-19 while copper prices jumped to a more than six-month peak on a better global outlook and supply fears in top producer Chile.

All eyes are on U.S. employment data, due later in the day, which are expected offer further cues into how the world's largest economy is coping with a rise in coronavirus cases in several states.

Risk sentiment was whetted by a COVID-19 vaccine from Pfizer (N:PFE) and Germany's BioNTech (O:BNTX), which was found to be well tolerated in early-stage human trials. (N)

A vaccine for COVID-19, which has killed more than half a million people globally and shut down the world economy, has been long anticipated.

"Based on a vaccine trial containing 45 people, including placebos, the V-shaped recovery gnomes, are once again, reaching for the sky," said Jeffrey Halley, Senior Market Analyst, Asia Pacific at OANDA.

MSCI's broadest index of Asia Pacific shares outside of Japan (MIAPJ0000PUS) rose 1.5% to near levels seen in early March.

Economists polled by Reuters expect private employers to show 2.9 new million new jobs June, which would follow a surprise increase in May. Casting some doubt over that projection, however, was a smaller-than-expected increase in jobs seen in the ADP (NASDAQ:ADP) report on Wednesday.

"A better-than-expected outcome could go some way to settling the near-term debate that the U.S. labor market will heal relatively quickly and justify new highs in U.S. equities," said Stephen Innes, strategist at AxiCorp.

Wall Street ended Wednesday higher after key economic indicators showed a rebound in Chinese manufacturing activity as it recovers from the pandemic while sharp declines in European factory activity eased.

Those developments have raised concerns about China's already strained relations with its major western trading partners, particularly the United States.

Meanwhile in Chile, where the number of COVID-19 cases have been climbing, miner BHP (AX:BHP) said it would begin to slow production at its small Cerro Colorado copper mine in the country.

Elsewhere, oil prices climbed and gold eased while the dollar was steady as encouraging macro data prompted investors to take on more risk.[O/R][GOL/]

The safe haven greenback was unchanged against the Japanese yen at 107.45. The euro was a shade higher at $1.1267 while sterling was slightly firmer at $1.2497.

The risk sensitive Australian and New Zealand dollar were 0.2% and 0.4% stronger respectively.